"Delia Robinson's current work employs sculpture, painting, drawing, and collage-- often all four elements in a single piece. In 'Angels Bring Ladders,' Styrofoam has been cut to the shape of a gable-roofed tower; pieces of cloth 'laundry' are affixed, angels and other figures are painted onto newsprint awash in white slashes and drips. The work has a dense surface. One of the strongest pieces is 'Sketchbook for the Summer That Never Happened.' It plays with three dimensions by placing a photocopy of notebook rings down the center of the canvas. The painting of a bucolic scene-- two girls afloat in inner tubes-- alternates with fabric featuring sky or critter (a rooster, in one instance) stapled to the canvas. This fine effect evokes fragments of dream or memory, a sense of nostalgia or melancoly. One of the delights of Robinson's work is the handling of the paint which here has a charming light-filled quality.

Robinson's stage of action is both personal and world-encompassing. In 'News of Startling Intensity,' a woman in an armchair watches TV as two jets stream out from it toward her, painted in fire-red. In six panels created specifically for this show, old newspaper clippings form the foundation for images that move from World War I ('At the Center of Bombardment') to the final panel's images of joy and peace ('Testing the World'), personified by a girl riding a bike in a stream of yellow light.

Among the more provocative pieces is Robinson's 'Baby Shirt Series'-- the placing of images of war, pollution, death, and destruction on a baby's white cotton undershirt. In 'The Globally Warmed Baby,' smokestacks pump plumes of black smoke, enveloping the surrounding buildings and trees. In 'Sun Play.' skeletons and red planes cover the shirt's front.

Robinson's desire to bring everything in gives her work a plastic depth, and her impassioned engagement with the world infuses these multilayered paintings with emotional and narrative punch."

This review covered a show at Gallery In The Woods, Brattleboro, Vermont.

Painting-- "Notebook for the Summer that Never Happened," detail 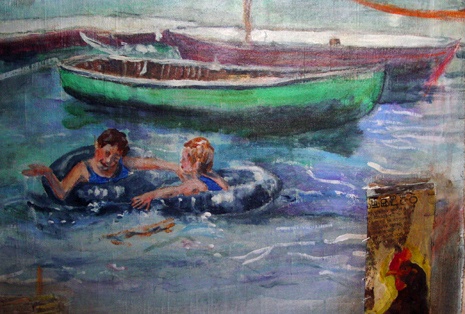