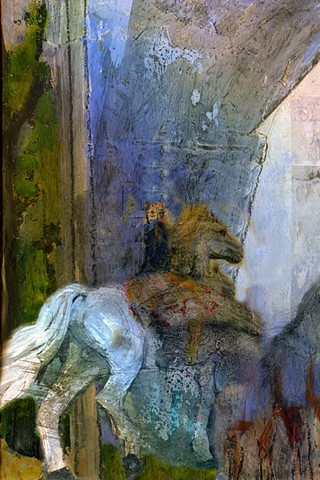 I grew up in a divided world. Part of the year I lived in my father's household where intellect was king. Einstein lived across the street in a neighborhood strewn with Nobel Laureates. These old world scholars discussed Plato around our dinner table, great men all, transformed by genius into half-gods. Where were the great women? Maybe there weren't any. Females were ornamental, expected to flatter and charm, useful for biological or culinary abilities.

The rest of the year I lived an intensely rural life in Southern Indiana. My grade school had a ten-hole outhouse, water was served in a dipper from a galvanized bucket, and books were delivered by library truck. Our household matriarchy was colored by dream, imagination, and song. Who told the best stories? Where was the best blackberry patch? What birds were nesting in the wisteria vine? We laughed, sang, picked beans, read, sewed, drew, made things out of whatever materials were at hand, and squabbled. Women were reliable but men came and went, valued primarily for their strength, biological functions, and money making skills.

Perhaps this explains my take on the world as reflected in art. My view is bioptic, cross-eyed, fragmented, salty, bitter, yet still hopeful. My work is overloaded with information, stories, color, and images-- most original, some pilfered, some in transition.