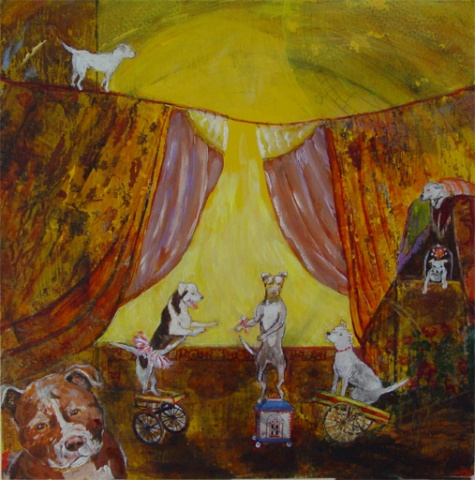 I recently found a photo of "Ginger, The Bull Pup," dated 1910, tucked in a moldy book from my father's family. My great grandfather took the photo in his old age at a time when Pit Bulls were the most beloved American dog. He was a river boat photographer and bigamist in the years after the Civil War going between studios and families in Cincinnati, Ohio and Greenville, Mississippi.

Because Ginger looks like my dog Alabama, the best dog imaginable but living at a time when Pit Bulls are the most maligned American dogs, the photo caught my interest.

Ginger, shown here as a circus proprietor, is in the foreground while her team of bull pup artistes do various stunts. The easiest act is sleeping, the most difficult the high wire, all a breeze for these capable, big-hearted creatures.