Art and the Politics of Mysticism: CHAOS AMONG THE SUPREMES[ by Jerome Lipani

"In May, the solemn architectural formalism of the Supreme Court Building in Montpelier played dark host to the irrepressible exuberance of the large, long paintings of Delia Robinson. They looked great -- extravagant, buoyant -- in juxtaposition to the magisterial doorways leading to the judges’ chambers which separated them. Free from want, free from fear, they gave a first impression of open-handed generosity and a zest for life.

In joyous defiance of the Supreme Court gallery's prohibition against the depiction of nudity or religion, nudity abounded, religion was everywhere in these paintings. A new freedom had been added to the Bill of Rights. Freedom of Painting. The warm reds, yellows, and luscious blues, partially shrouded in a transparent white, offered a sense of mystery, of intelligent discretion, or perhaps of awakening in or from a dream.

Robinson’s painterly vocabulary includes the use of found-objects from the print media turned in reverse so that their texts become symbolic or hieroglyphic, relics or refuse from the burden of memory. Surfacing among these pieces of informational yet hyper-personal detritus are anatomical drawings from medical textbooks, treatises on mysticism by Hindu spiritual teachers, pieces of sheet music, the stock market tables, and old published and unpublished photographs blended with acrylic paints dripped and scumbled. Some of the images are then peeled off, and their shreds allowed to remain on the surface. The art historical traces of Cezanne-like still-lives -- bulbs just coming to life again, or oranges, or a suddenly appearing warren of rabbits -- are well-painted on top of these found images in a way that defies any thought of the decorous.

These elements float over the primary but subliminal and dreamlike images, which are often of a faceless human being, usually a woman, her anatomy revealed as if x-rayed, who seems existentially in search of a Self. In a style which is unrepressed and unselfconscious, images are superimposed upon each other, obscured, then partially revealed in a visually rhythmic attempt to depict layers of meaning and a relationship of simultaneity between past, present and future, or of the quick succession of thoughts in the mind of the creator. This layering gives effects that are sometimes mysterious, or ubiquitous, or horrendous. At times the images seem to want to supervise each other, or demand something from their context with each other, or to supersede each other randomly. This is a visual dynamic which seeks to depict the process of revelation, or perhaps, more specifically, the process of self-realization. A delicate balance between objective analysis and emotional intelligence is demanded of this project, and it produces a certain visual lyricism. Extrapolated to society-at-large -- or their own viewing public -- the images may represent a society coming to terms with its own cultural elements, its particular cultural norms. In the marbled context of the Supreme Court, they seemed like visual arguments for and against the attempted legislation of free thought, free speech.

The insouciance of Robinson's technique transcends its relationship to the art of the early dadas and surrealists, as well as to its kinship to Rauschenberg’s first breakthrough work. The painter announces that her progenitors succeeded in creating a language which continues to serve the contemporary needs of contemporary painters, and that this language has now become a lingua franca. No longer shocking in its iconoclasm, it is now permitted to reveal a more subtle expressiveness.

The show divides into several major sections, which however overlap stylistically. The Wheel series are free improvisations or meditations based upon the symbolism of the seven chakras, but translated into visual terms so contemporary that you would not recognize them as having any relationship with classical Hindu iconography. And you don’t need to make that connection, even, for them to move you into a dynamic need to connect with yourself again somehow. For me, they are very successful depictions of existential struggle and the fundamental duality familiar to students of Buddhism. They swing back and forth between the polarities of objectivity/subjectivity, fullness/emptiness, dream/waking reality, freedom/anxiety, flowering/dying.

Several overtly political pieces feature a fat man on infinitely long legs, made from the stock market pages, who floats -- like a gigantic balloon on the opening day of a new shopping mall -- over images of war, oppression, destruction, industrialization.

Three other paintings were inspired by old Japanese woodblock prints called "Ox Herding." These concern themselves with depictions of a gradually awakening consciousness through a self-imposed process of meditation and contemplation. The third shows an open-faced girl on a bicycle pedaling into a smiling infinity, having left behind many wheels which appear to be going nowhere. The show ended with this image conducting the visitor back to the outside world.

The beautiful and disturbing The Haunted Sketchbooks, the Life and Art of Laura Nelkin, 1957-2001, is an elegy dedicated to a friend who "with nothing left, ...was overtaken in flight and died by her own hand." Among all of the other images of women in this show, who are in various stages of realizing themselves as women, or as female archetypes, these images made from Nelkin’s photographs of herself as a child and as an adult (and left by her in Robinson’s attic), are especially poignant -- and disturbing -- because she is the one who gave herself over to despair. In stark contrast, the other women seemed to create hope out of hope, itself. They stood brave and vulnerable before the Court as if daring it to judge them negatively, or to applaud and support their choice." Jerome Lipani is a multi-media artist living in Calais, Vermont 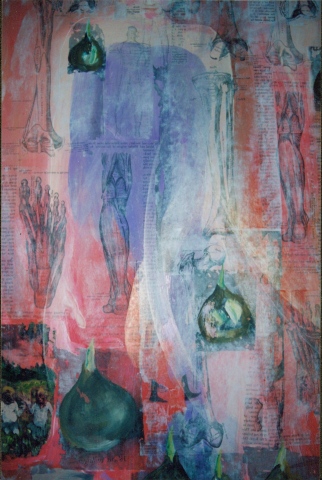